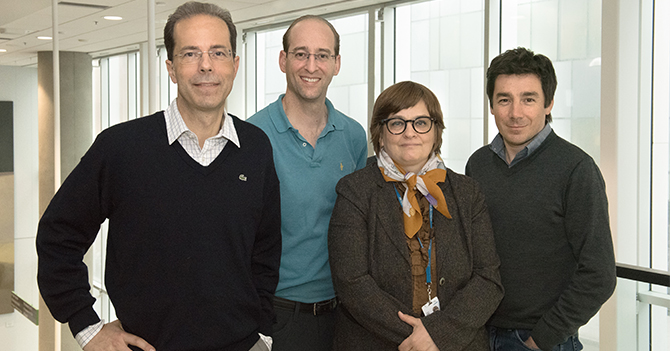 From the top of the staircase of the R building at the CHUM Research Centre, Drs. Petronela Ancuta, Nicolas Chomont, Andrès Finzi and Daniel Kaufmann are smiling ear to ear. In a corner, a photographer is waiting for them to stop their juvenile posing so that he can capture the sincere bond between them. The chemistry among these researchers is palpable, which has much to do with the fact that they succeeded in securing two substantial grants from the Canadian Institutes of Health Research (CIHR) in April.

“In the field of HIV cures, it's rare to be able to combine the expertise of four major researchers in immunology, virology and structural biology within the same research centre. To my knowledge, we are one of the only centres in North America with such a well-rounded team,” said Chomont.

And according to Finzi, “The CRCHUM's strategic vision of having a critical mass of expert HIV researchers was the right choice, because the return on investment has been incredible.” The results of the CIHR competition for the HIV/AIDS Biomedical and Clinical Research Team Grant prove him right.

For the “HIV/AIDS Biomedical and Clinical research – Cure – Large” category, the pan-Canadian research team from the Canadian HIV Cure Enterprise (CanCURE), with members Ancuta and Chomont, received a five-year, $6 million grant for their project Canadian HIV Cure Enterprise 2.0: Targeting the interplay between myeloid cells and CD4+ T-cells for HIV cure. Two of the three components of this project are co-directed by our two researchers. They will each receive $500,000 in funding over a period of 5 years for their work.

Finzi and Kaufmann will receive a five-year, $2 million grant for the project Unlocking HIV-1 Env Towards a Cure from the “HIV/AIDS Biomedical and Clinical Research – Cure – Focused” category.

Off to new horizons
Behind CanCURE, which was established in 2014, is a unique pan-Canadian scientific collaboration little known to the public. Its objectives are clear: study the mechanisms of HIV persistence during antiretroviral therapy and develop strategies aimed at a functional cure for it.

Ancuta has been part of this scientific journey from the outset.
“Between 2014 and 2019, we focused our research on identifying new therapeutic targets for ‘shock and kill’ and ‘block and lock’ strategies in both myeloid and lymphoid cells. This new funding will allow us to continue exploring the direct and indirect contribution of myeloid cells in maintaining HIV reservoirs. We’ll also be able to test new therapeutic targets identified in preclinical models and through clinical studies,” she explained.

HIV reservoirs are cells and tissues in which the virus persists, despite antiretroviral therapy treatments, which prevent the infection from developing into acquired immunodeficiency syndrome (AIDS). In order to live and reproduce, HIV needs to be harboured in a host cell and behave like a human gene. Generally, it moves into long-lived CD4+ T lymphocytes, white blood cells responsible for activating the body’s defence system against infections.

The virus becomes latent in some CD4+ T cells and establishes a reservoir that is controlled but not eliminated by antiretroviral therapy treatments. These reservoir cells have been the subject of intense research and are the final obstacle in eradicating the virus. Because of these cells, those living with HIV have to undergo antiretroviral therapy treatments for the rest of their lives.

Myeloid cells, which can develop into other types of white blood cells, develop in the areas surrounding CD4+ T cells and interact with them. Myeloid cells are found not only circulating in the blood stream, but also in tissues of the human body. Some of these myeloid cells are derived from tissue precursor cells of embryonic origin and can renew themselves continuously throughout a lifetime.

Can HIV reservoirs hide in myeloid tissue cells?
So far, it has been difficult to answer this question without access to biopsies or rare deep tissue from autopsies (two cases in 2018).

Thanks to the close partnership established between CanCURE and the community of people living with HIV, Ancuta will have access to these types of clinical samples and will try to find scientific answers with her colleagues, Drs. Eric Cohen (CIHR), Jerome Estaquier (Université Laval), Jean-Pierre Routy (McGill University), and Jonathan Angel (University of Ottawa), as well as the entire CanCURE 2.0 team. There are also plans to run trials on humanized mice and macaque monkeys.

“The CanCURE 2.0 project is pioneering in that it takes into consideration the dialogue between myeloid cells and T cells in the functioning of the immune system and in the persistence of HIV reservoirs,” said the researcher.

Over the next five years, Chomont and his colleague, Dr. Thomas T. Murooka (University of Manitoba), will focus on the cellular interactions that allow for the creation of HIV reservoirs in CD4+ T lymphocytes.

“Understanding the interactions between myeloid cells and these lymphocytes and then observing the impacts of this continuous communication on the persistence of HIV is still an understudied area,” specified Chomont, recently the chair of the scientific committee for the Journées québécoises du VIH and a supporter of a healthy collaborative spirit within this scientific community.

A story of science and chance
The CIHR funding received by the team led by Finzi stems directly from the researcher’s recent work.

In the journal Cell Host & Microbe, an international team brought together by Dr. Finzi showed how it succeeded in viewing a previously unknown configuration of HIV and reveal very detailed image of its weaknesses. This major breakthrough was made possible through the use of a molecular “can opener” to expose parts of the viral envelope that can be targeted by antibodies.

“Can we stabilize this vulnerable conformation in vivo in animal models? If we can, will its exposure allow for the eradication of infected cells and reduce the size of the HIV reservoirs? Thanks to this grant, we'll be able to answer these questions,” explains Finzi.

Kaufmann pointed out that the success of this application to the CIHR was based on the very complementary technical and conceptual advances of two research laboratories – Finzi's, on the one hand, and Kaufmann's, on the other, the latter having considerably improved the characterization of the viral reservoirs and refined quantification methods for the latent viral reservoir in 2016.

However, to start testing the concept on animals, these two researchers were able to count on a key element in research: chance. This chance appeared to them in human form during a conference given at the CRCHUM: Dr. Priti Kumar from Yale University, an expert in animal models. The collaboration that stemmed from this encounter demonstrates the importance of exchanging ideas during the weekly scientific conferences organized by the research centre.

“Without this ambitious researcher, our study would have never been able to get off the ground. This remarkable addition to our team will allow us to demonstrate the clinical relevance of our approach on humanized mice,” explained Finzi.

Even though a lot of work remains to be done before translating the future results of this research to humans, the breakthroughs accomplished by these four researchers make for an impressive step forward in the fight against HIV.