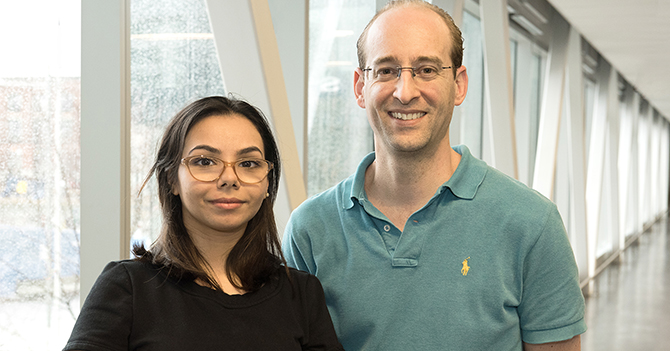 Legend: Andrés Finzi, researcher at the CRCHUM and Nirmin Alsahafi, recent phD and first author on the study.

Breakthrough opens new paths to fight against the deadly virus

Imagine that HIV is a sealed tin can: if you opened it, what would you find inside? An international team led by researchers at the University of Montreal Hospital Research Centre (CRCHUM), Tufts University School of Medicine, and the University of Melbourne think they know. For the first time, they have visualized what the “open can” of the human immunodeficiency virus looks like, revealing a previously unknown virus shape and a very detailed image of the vulnerabilities of the virus.

Published April 10 in the journal Cell Host & Microbe, this major breakthrough was made possible through the use of a molecular “can opener” to expose parts of the virus envelope that can be targeted by antibodies.

“The characterization of the new shape of the virus envelope reveals unique details about the vulnerability of HIV that might be useful in strategies aimed at its eradication," said Andrés Finzi, one of the lead authors of the study, a researcher at the CRCHUM and a professor at University of Montreal. "It certainly opens new paths in the fight against this deadly virus.”

When HIV infects cells of the human immune system, it uses its envelope's spike to attach itself to specific receptors on the cells, called CD4 and CCR5. Binding to the CD4 receptor triggers changes in the shape of the envelope that allow the virus to infect the host cell. The new research describes the use of small- molecule CD4-mimetic compounds designed and synthesized at the University of Pennsylvania to force the virus to open up and to expose vulnerable parts of its envelope, allowing the immune system cells to kill the infected cells.

In an earlier study published in PNAS in 2015, researchers led by Finzi showed that exposing these vulnerable parts of the envelope facilitates the elimination of infected cells by a mechanism known as antibody-dependent cellular cytotoxicity (ADCC).

How to map HIV's vulnerabilities

Tufts researchers were able to visualize the previously unknown shape of the virus envelope using a new technology – single-molecule Förster resonance energy transfer, or smFRET – that allows researchers to see how distinct elements of the envelope move with respect to one another. This provides a direct means of seeing that the HIV envelope is a dynamic machine with moving parts that allows it to adopt various shapes in response to stimuli such as antibodies or small molecules.

“We hope that visualizing the virus envelope’s shape will help in the development of vaccine candidates that specifically exploit ADCC," said James Munro, a lead author of the study and assistant professor of molecular biology and microbiology at Tufts University School of Medicine who was part of the team that pioneered the use of smFRET to better understand how the HIV-1 virus infects a human cell in real time. "In the Thai vaccine trial, to date the only vaccine trial that showed a modest level of protection from HIV infection, generation of antibodies with ADCC activity was one factor correlated with protection from the virus.”

The smFRET results were confirmed using cryo-electron microscopy (cryo-EM), a technique adopted nearly 20 years ago by Isabelle Rouiller, a lead author of the study and an associate professor at the University of Melbourne, and which has recently gained recognition by the scientific community.

“It is fascinating how viruses protect themselves. Modern approaches such as single particle cryo-EM now allow us to look in detail at the molecular mechanisms developed through evolution. Directly visualizing the molecules at the surface of HIV will allow us to devise strategies to cure disease. It's a dream come true!” said Rouiller.

In 2017, nearly 37 million people were living with HIV. Every day, 5,000 new infections are reported to health authorities around the world.