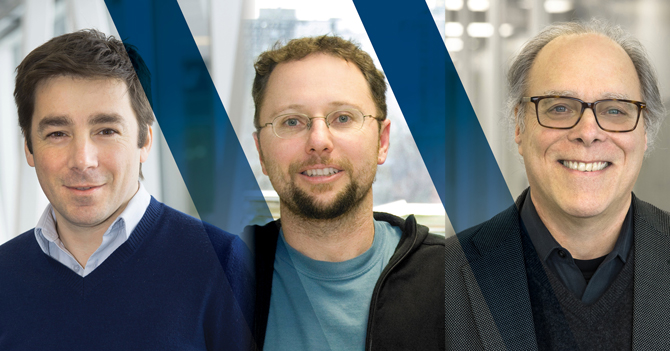 The University of Montreal Hospital Research Centre (CRCHUM) is proud to announce the three recipients of its 2019 Awards of Excellence.

This year, this new vintage once again acknowledges the exceptional performance of CRCHUM researchers in the area of health research. 2019’s award winners can already hold a candle to past winners, including those of 2018 and 2017.

An exceptional researcher, a generous and galvanizing leader, a visionary of sorts: Jacques A. de Guise’s colleagues aren’t shy about heaping praise on him. In reality, however, the man is very humble about the numerous prestigious affiliations he has accumulated over the years.

“We are privileged to have Jacques de Guise among our researchers. A true pioneer in several areas of medical imaging and an uncontested leader, he has successfully made quality and patient partnership initiatives integral parts of his research program, using very original and innovative approaches,” stated Vincent Poitout, director of research at the CHUM and scientific director of the CRCHUM.

In all of their projects, the teams led by Jacques de Guise listen to patient partners’ voices and learn about their ailments to be sure that the research they carry out will truly impact their lives. To this end, the Living Lab approach, which puts clinicians, industry partners and patients at the heart of university research, owes much to him.

From early on in his career, he has managed to build bridges between numerous disciplines (engineers, clinicians and industry) to foster innovative research, as demonstrated by his recent project funded by the FRQS’s Audace Program.

And it’s no accident that he’s the founder and director of the Imaging and Orthopedics Research Laboratory, affiliated with the ÉTS, the CRCHUM, the CHU-Ste. Justine Hospital Research Centre and Montreal’s Sacré-Cœur Hospital Research Centre. A laboratory that will produce innovations such as the low-dose biplanar x-ray radiographic system marketed today by the company EOS Imaging, or the knee kinesiography, also known under the commercial name KneeKG (Emovi).

For all these reasons, Jacques A. de Guise is the recipient of the 2019 Award of Excellence in the “Career” category, in recognition of the outstanding scientific contributions he has made throughout his career.

“This is clearly a huge honour. A career award? I hope it doesn’t mean ‘move aside’!” joked Jacques before returning to the subject of his life, his valuable collaborative partnerships, and the men and women who have placed their trust in him throughout the years.

A regular researcher at the CRCHUM (Immunopathology research theme) and a professor in the Department of Microbiology, Infectious Diseases and Immunology of the Université de Montréal’s Faculty of Medicine, Nicolas Chomont is the recipient of the 2019 Award of Excellence - “Young Researcher” category. This award recognizes the outstanding scientific contribution of a researcher whose research program has been in existence for less than ten years.

After providing a layman’s explanation of his recent research work, Nicolas Chomont reminded us, rightly and emotionally, that, just as research is not a solitary endeavour, research awards don’t recognize one single person. “I owe so much to my team and my partners.”

“Nicolas is a young researcher who has established himself as an international leader in the understanding of the mechanisms responsible for the persistence of the HIV virus during antiretroviral therapies to develop strategies to eliminate the virus. We’re proud that he chose to pursue his career at the CRCHUM,” said Vincent Poitout.

With 119 articles published, including 73 since 2014, mostly in high-impact journals, Nicolas Chomont’s scientific output is remarkable. However, even more significant than the numbers is the fact that he enjoys international recognition and is regularly called upon to sit on international conference organizing committees: the International AIDS Conference and the International Workshop on HIV Persistence During Therapy, for example.

A talented university professor, he received the Teaching Award of Excellence in 2018 from the students in the Department of Microbiology, Infectious Diseases and Immunology of the Université de Montréal’s Faculty of Medicine.

2019 Award of Excellence ‒ Scientific Contribution of the Year

In the “Scientific Contribution of the Year” category, Francis Rodier, a researcher at the CRCHUM (Cancer Research theme) and a professor in the Department of Radiology, Radiation Oncology and Nuclear Medicine of the Université de Montréal’s Faculty of Medicine, is the recipient of the 2019 Award of Excellence for his study entitled “Exploiting interconnected synthetic lethal interactions between PARP inhibition and cancer cell reversible senescence” published in Nature Communications.

’’Translational research is what motivated me to come work at the CRCHUM a few years ago. I’m very pleased that this award recognizes ‘bench to bedside’ work,” stated Francis Rodier. And for good reason: the results of his research stem from close collaboration between his laboratory and the ovarian cancer research group led by Anne-Marie Mes-Masson and Dr. Diane Provencher.

The team of researchers developed a two-step combination therapy to destroy cancer cells. In their study, they demonstrate the superior therapeutic effectiveness of this “one-two punch” on cells of ovarian cancer patients, based on manipulation of the state of cellular aging.

For Vincent Poitout, “the teamwork between Francis Rodier and his collaborators, recognized by this award, opens a new therapeutic approach for the treatment of certain cancers and represents a wonderful example of the contribution of basic research to medical advances.”

About the CRCHUM Research Awards of Excellence

The CRCHUM Awards of Excellence have been presented since 2012. They are honorary awards that highlight the significant contributions our researchers have made to the advancement of health research. The recipients are selected by the Research Centre’s scientific committee from among our 140 or so regular researchers.

Please refer to the biographical information sheets of the recipients for their profiles and scientific publications.