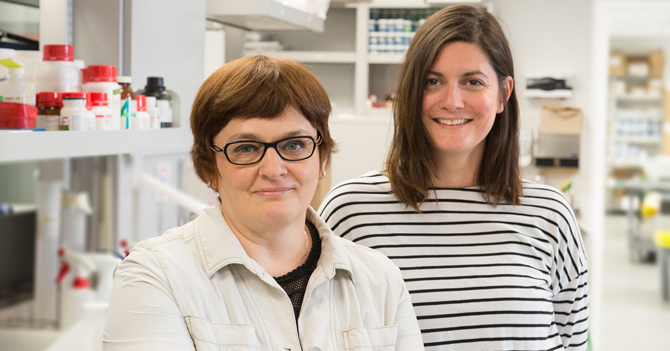 18 September 2017
Researchers at the University of Montreal Hospital Research Centre (CRCHUM) are discovering a way to slow virus replication in the gastrointestinal tract of people with HIV/AIDS.

This breakthrough, published in JCI Insight in August 2017 could lead to the development of a new therapeutic strategy to be used in addition to antiretroviral drugs (ARVs) to help control viral replication in HIV-infected people and prevent complications related to the chronic nature of the infection.

“We have identified a molecule that stimulates HIV replication in CD4 T cells located in the gut. We have also started testing drugs to block this replication and reduce inflammation in the intestinal mucosa. This is a promising approach to eradicating HIV, or at least achieving a functional cure,” stated CRCHUM researcher and Université de Montréal professor Petronela Ancuta.

The ARVs used to treat HIV-infected people reduce the viral load to a level often undetectable in the blood and are effective in preventing the infection from progressing to acquired immunodeficiency syndrome (AIDS). But HIV is stubborn. “Despite the efficacy of antivirals, it holes up in certain cells of the immune system – CDF T cells – that it uses for shelter, and forms viral “reservoirs” in different peripheral tissues, mainly the gastrointestinal tract. In these reservoirs, some viruses continue to replicate, which causes harmful inflammation in the gut. This is what gave us the idea of identifying new drugs to limit viral replication at all levels and to counteract inflammation,” explained Ancuta.

The CD4 T cells migrate from the blood to the gut thanks to targeting molecules expressed on their surface. Some of the latter, called CCR6 molecules, act as postal codes, indicating to the cells that they need to head towards the gastrointestinal tract. Researchers had previously shown that cells expressing the CCR6 molecule were preferred targets of in vitro infection and viral “reservoirs” in subjects receiving ARV treatment.

Using biopsies of the sigmoid colon and the blood of HIV-infected people on ARV therapy, the team headed by Ancuta, working closely with Jean-Pierre Routy at the McGill University Health Centre Research Institute (MUHC-RI) has now discovered that, in the colon, CD4 T cells that express the CCR6 postal code also contain a large amount of another molecule, mTOR, an important regulator of cell growth.

“The mTOR molecule is partly responsible for the high level of vulnerability to HIV of CD4 T cells expressing CCR6 and living in the gut,” explained Planas.

By interfering with mTOR activity in in vitro experiments with existing drugs, the researchers were able to significantly slow down HIV replication in the cells of HIV-infected patients whose viral load was undetectable.

Drugs that inhibit mTOR activity are used successfully for the treatment of diabetes and cancer. Other studies need to be carried out to validate their use in the treatment of HIV/AIDS. But the researchers already see a potential for improving the quality of life of HIV-infected patients, as well as their chances of being cured, by using mTOR inhibitors in addition to antiretroviral treatments.

“By specifically targeting the CD4 T cells that carry the CCR6 molecule containing dormant HIV, we think that these drugs will reduce the intestinal inflammation of people on ARVs. In the long term, we hope that this type of treatment can further reduce the amount of virus remaining in reservoirs in the gastrointestinal tract. Therefore, this is an important strategy towards a cure for HIV, one that deserves to be tested,” concluded Ancuta.

The study “HIV-1 selectively targets gut-homing CCR6+CD4+ T cells via mTOR-dependant mechanisms” by Planas et al. was published on August 16, 2017, in JCI Insight. It received funding from the Canadian Institutes of Health Research (CIHR) (MOP-82849 and MOP-114957), the CIHR Canadian HIV Trials Network (CTN 247), the Fonds de recherche du Québec - Santé (FRQS), the AIDS and Infectious Disease Network of the FRQS and a grant from the CIHR’s Canadian HIV/AIDS Research Initiative (HIG-133050), in partnership with the Canadian Foundation for AIDS Research and the International AIDS Society.