Cystic Fibrosis: discovery of a key molecule to improve treatment 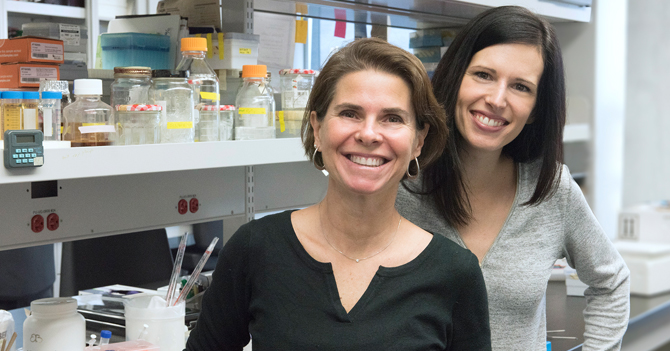 12 November 2017
Researchers from the University of Montreal Hospital Research Centre (CRCHUM) have identified a promising approach to improving treatments offered to people with cystic fibrosis. This breakthrough, published recently in Frontiers in Cellular and Infection Microbiology, could lead to the development of new personalized therapies in the near future.

Cystic fibrosis is a deadly genetic disease that affects children and adults. It is characterized by excess mucus production in many organs, repeated bacterial infections and the gradual deterioration of the lungs. No cure exists at this time. When the disease is too advanced, the only option is a lung transplant.

One aspect that makes cystic fibrosis research difficult is the variability of the disease from one patient to the next. In fact, there are more than 2,000 genetic mutations possible. For ten years, two treatments have been offered to certain patients: Kalydeco for people with a type of rare mutations (fewer than 4% of patients), and Orkambi for the most common mutation (79% of patients). Unfortunately, these two drugs have limited efficacy.

Brochiero’s team is seeking to understand why. With patients’ consent, they collect cells in the nose and also reuse the lungs removed from patients with cystic fibrosis when they undergo a lung transplant. The scientists then recreate airway epithelial tissue using tissue engineering to study the disease and test therapeutic approaches.

“People with cystic fibrosis present genetic defects that cause an abnormal production of a protein called CFTR in cells and excess mucus in organs. “Current drugs act to correct the CFTR protein defect. In a sterile in vitro environment, Kalydeco and Orkambi work well. But in real life, the lungs of sick patients are colonized by bacteria, mainly Pseudomonas aeruginosa. Much evidence indicated that the bacteria might be interfering with the treatment. With this study, we were able to determine what substances released by the bacteria could interfere with the efficacy of the treatments,” stated Brochiero.

Some of these harmful particles are under the control of a bacterial quorum-sensing gene called the lasR gene. “During the disease, this bacterial gene mutates and the production of harmful products varies. Our work confirms that different strains of bacteria, depending on whether they come from acute infections – mostly in young patients, or from chronic infections – mainly in older patients – affect treatment efficacy in the different ways,” said Émilie Maille, a research assistant in Brochiero’s lab and the first author of the study.

The researchers then tested in vitro the impact of adding a quorum sensing inhibitor from the furanone family. “We showed that this molecule, by reducing the bacterial production of harmful residues, maintains treatment efficacy in the cells of patients with cystic fibrosis,” stated Brochiero.

Additional research has to be conducted to confirm the efficacy and safety of the quorum sensing inhibitors, which may eventually be offered in addition to current drugs.

But this study has already introduced a new personalized medicine approach for cystic fibrosis. “By using cells collected from patients, we think it would be possible to test and predict the efficacy of treatments such as Kalydeco and Orkambi, based on the bacteria taken from each patient. We will also evaluate the ability of the treatments to repair damaged lung tissue. And lastly, we’ll identify which molecules, such as bacterial quorum sensing inhibitors, are most effective in counteracting the harmful effect of infections. The ultimate goal is to improve treatments for patients and prolong their life,” stated Brochiero.

The study “Qurorum Sensing Down-Regulation Counteracts the Negative Impact of Pseudomonas aeruginosa on CFTR Channel Expression, Function and Rescue in Human Airway Epithelial Cells” was published on November 10, 2017, in Frontiers in Cellular and Infection Microbiology. The study was headed by Emmanuelle Brochiero of the University of Montreal Hospital Research Centre (CRCHUM), in collaboration with Dao Nguyen’s group at the McGill University Health Centre Research Institute. The work received funding mainly from Cystic Fibrosis Canada, the Canadian Institutes of Health Research (CIHR), the association Vaincre la Mucoviscidose and the Fonds de recherche du Québec – Santé (FRQS). The study is available for consultation: DOI: 10.3389/fcimb.2017.00470