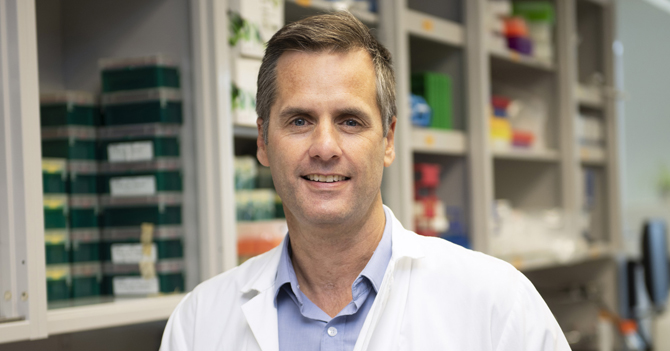 Did you know that nearly 30,000 Canadians are diagnosed with lung cancer every year? The most common type, non-small cell lung cancer, accounts for between 80 and 85% of all cases. A recent phase 2 clinical trial relying on anti-CD73 therapy shows encouraging results. Behind the development of this immunotherapy: researcher John Stagg and his team at the CRCHUM.

In the field of immuno-oncology, John Stagg is regarded as a pioneer. With the scientists on his team, he was the first to show in 2010 that an antibody targeting the CD73 enzyme helps block the production of extracellular adenosine, thereby stimulating the antitumour activity of the immune system.

Through this mechanism, anti-CD73 antibodies participate in restoring the functionality of the immune system. They also improve the efficacy of existing drugs that target the PD-1 checkpoint.

T-cells—white blood cells—have on their surface a protein called PD-1, an immune checkpoint that prevents them from attacking normal or tumour cells if the latter have another protein, PD-L1, on their surface.

In the case of non-small cell lung cancer (NSCLC), the tumour cells have a lot of PD-L1, which helps them protect themselves from an attack of the immune system and its T-cells. This also helps them continue to grow in the human body.

In the randomized phase 2 clinical trial conducted by Astra Zeneca, interim results show that durvalumab, a drug targeting the PD-1 checkpoint, combined with oleclumab, an anti-CD73 monoclonal antibody, reduced the chances of disease progression or death by more than 50% in inoperable stage 3 NSCLC patients, compared to the standard treatment. This advanced stage accounts for 25% of all cases of this particular cancer.

“I find these preliminary results to be very encouraging. And knowing that they are based on discoveries made in my laboratory makes me both proud and pleased,” said John Stagg, a professor in the Université de Montréal’s Faculty of Pharmacy and the Co-chair of the Jean-Guy Sabourin Family Pharmaceutical Chair in Women’s Health.

In 2007, Stagg’s postdoctoral training at the University of Melbourne in Australia brought him down the adenosine pathway—almost by chance.

His wife, Sandra Pommey, was working in a transplant laboratory and studying extracellular adenosine, an inflammation regulator.

John knew he was on to something. He explored the idea that this pathway used by adenosine, derived from the CD73 enzyme, was also involved in tumour progression.

In his study published in PNAS in 2010, he showed for the first time that anti-CD73 antibody therapy can inhibit tumour growth and tumour metastases. The proof-of-concept study was performed on breast cancer cells.

Around the world, other research teams came to the same conclusions afterwards, strengthening scientific consensus on the matter.

In the big leagues

The discoveries of the team headed by Stagg opened the door to the development of several therapeutic agents targeting the extracellular adenosine pathway.

At the time, the University of Melbourne didn’t consider it overly necessary to protect the discovery. Once the international provisional patent had expired in 2012, Stagg was contacted by Astra Zeneca.

“From 2012 to 2014, my team and I participated in the development of oleclumab in collaboration with this pharmaceutical company. We also worked to identify the types of cancers in which the enzyme CD73 is expressed. Our successful completion of this work owes much to the CHUM’s cancer tissue biobanks, established by my colleagues Anne-Marie Mes-Masson and Drs. Diane Provencher, Fred Saad, Simon Turcotte and Jean-Baptiste Lattouf,” explained the researcher.

Since then, many other pharmaceutical companies have entered this niche market. Today, at least thirty clinical trials using an anti-adenosine therapeutic approach are underway around the world.

In fact, this is the case at the CRCHUM’s Unité d’innovations thérapeutiques (UIT).

Stagg has been pursuing his “therapeutic adventure” since 2015 through his research work conducted at the CRCHUM and at the biotech start-up, Surface Oncology, which he cofounded in Boston.

Nothing seems to be able to dampen his enthusiasm and thirst for discoveries. Far, very far, from those horizons down under.