Cell division in embryos: not a textbook case of symmetry 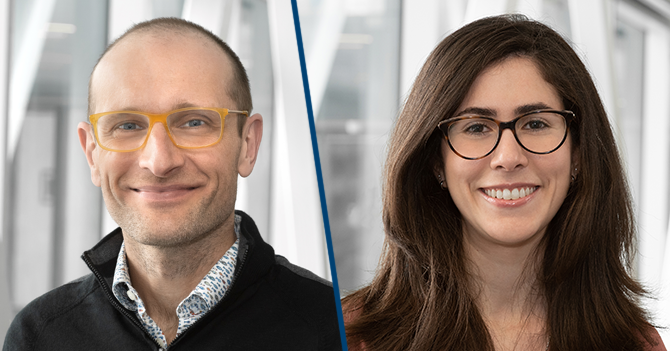 Two researchers from the CHUM Research Centre find that cell division in mouse embryos is not symmetric at all, quite unlike what science textbooks normally say.

As cell biologists, Université de Montréal professor Greg FitzHarris and his Ph.D. student Lia Paim are very interested in fertility and what happens inside the eggs and embryos of the mice they study in their lab. And sometimes, they spot something unusual… by accident.

Their latest findings, published in PNAS, could change how one particular aspect of cell division is understood and pave the way for further research on how this might play a role in the viability of the embryo—even a human one.

To learn more, we asked Fitzharris what he and his co-author’s work is all about.

Q: You made this new observation somewhat by accident. How did it happen?

A: Most of our lab’s experiments are about embryo development. We focus on understanding what makes the best embryo and how this relates to the embryo’s potential and thus the likelihood of having a successful pregnancy.

The mouse embryo is also a unique setting for studying cell divisions.

In one of our experiments, Lia spotted something unusual happening during cell division. In a real-life situation such as a developing embryo in which cells are in close contact with other surrounding cells, she noticed that during the final step of cell division, called cytokinesis, the cell is pinched in two primarily from one side only.

And she realized that the particular way in which this was occurring had not been seen by researchers before.

Q: Why were you surprised by what you saw?

A: The traditional textbook view of cytokinesis is that it occurs in a symmetric manner, where a pinching of the cell happens equally from both sides to cut the mother cell in two and make two new daughter cells.

Lia discovered that molecules called cell polarity proteins have a major effect upon cytokinesis in embryos. This is why cytokinesis becomes asymmetric, quite unlike what the textbooks show.

Q. How could this cell polarity affect the mechanisms of cell divisions?

A. It is well known that cytokinesis sometimes fails in embryos, and that this can threaten the viability of the embryo and thus the likelihood of having a successful pregnancy, in mice as in humans. The asymmetric cytokinesis we discovered could be part of the reason for this, but we would need to do more experiments to test this possibility.

Q. Is that what you’re preparing to do?

A. Actually, these are the last experiments of Lia’s Ph.D. She is next off to the United States to study a different aspect of embryo development. But yes, in our lab we will continue to try to

understand how the unusual features of cell division found in the embryo are responsible for the fertility problems experienced by some patients.

Q. Finally, do you think your observations could change the way cell division is represented in science textbooks?

A. Maybe. But certainly, it’s important for researchers to understand that the cell biological process they are looking at might be adapted or specialized to the specific setting they are studying, rather than assuming that cells always divide the same way in all contexts.

“Cell size and polarization determine cytokinesis furrow ingression dynamics in mouse embryos,” by Lia Paim and Greg FitzHarris, was published March 16, 2022, in PNAS. Funding was provided by the Natural Sciences and Engineering Research Council of Canada, the Fondation Jean-Louis Lévesque, the Canadian Foundation for Innovation, and the Canadian Institutes of Health Research.