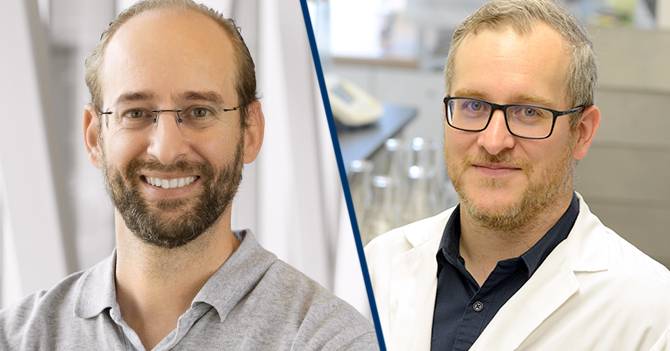 Montréal, May 20, 2021 — Researchers at the University of Montreal Hospital Research Centre (CRCHUM) and Yale University have succeeded in reducing the size of the HIV reservoir in humanized mice by using a “molecular can opener” and a combination of antibodies found in the blood of infected individuals.

In their study published in Cell Host & Microbe, the team of scientists, in collaboration with their colleagues at the University of Pennsylvania and Harvard Medical School, show that they were also able to significantly delay the return of the virus after stopping antiretroviral therapy in this animal model.

Humanized mice are generated from immunodeficient mice that don’t have their own immune system. They are transplanted with human immune cells and can be used to study diseases affecting the human immune system such as cancer, leukemia or HIV. Researchers at Yale University developed a specific humanized mouse model with active Natural Killer cells (NK), a type of immune cell, to study their role in HIV infection.

“With our cocktail of two antibodies naturally present in the plasma of HIV-infected people and a small ‘can opener’ molecule, we managed to ‘open up’ and stabilize a vulnerable form of the virus envelope,” said the study’s co-lead author Andrés Finzi, a researcher at the CRCHUM and professor at Université de Montréal. “The antibodies recognized the virus, had time to call the immune system’s ‘police’, the NK cells, and to get rid of the infected cells.”

To infect cells of the human immune system, HIV binds with its envelope to specific receptors on the surface of these cells, including one called CD4. This binding triggers changes in the shape of the virus envelope, its “key” to entry, and allows it to infect host cells.

In 2019, in an earlier study, a team led by Finzi and James Munro of Tufts University showed that small CD4-like molecules, designed and synthesized by the Amos Smith Group at the University of Pennsylvania, acted as “can openers” and were able to force the virus to open and expose vulnerable parts of its envelope.

“In our humanized mouse model developed at Yale and used to study HIV, we show that the cocktail not only limits viral replication, it also decreases the HIV reservoir by destroying infected cells,” said Priti Kumar, lead author and professor at Yale University.

Throughout the course of antiretroviral therapy, HIV hides silently in reservoirs located in CD4+ T lymphocytes, the white blood cells that help activate the immune system against infections and fight microbes.

The existence of these hidden viral sanctuaries explains why antiretroviral therapy does not cure people with HIV and why they must remain on treatment for life to prevent the virus from “rebounding”.

“In humanized mice, we stopped antiretroviral therapy before administering our cocktail,” said Finzi. “The rebound of the virus occurred 46 days later as opposed to mice that did not get the cocktail, where rebound occurred within 10 days. Such efficiency in this animal model is really very promising.”

These findings open up new therapeutic avenues in the fight against this deadly virus. According to the World Health Organization, 38 million people were living with HIV at the end of 2019.

The University of Montreal Hospital Research Centre (CRCHUM) is one of North America’s leading hospital research centres. It strives to improve adult health through a research continuum covering such disciplines as the fundamental sciences, clinical research and public health. Over 1,850 people work at the CRCHUM, including more than 550 researchers and more than 460 graduate students. chumontreal.qc.ca/crchum
@CRCHUM

Deeply rooted in Montreal and dedicated to its international mission, Université de Montréal is one of the top universities in the French-speaking world. Founded in 1878, Université de Montréal today has 13 faculties and schools, and together with its two affiliated schools, HEC Montréal and Polytechnique Montréal, constitutes the largest centre of higher education and research in Québec and one of the major centres in North America. It brings together 2,400 professors and researchers and has more than 67,000 students. umontreal.ca