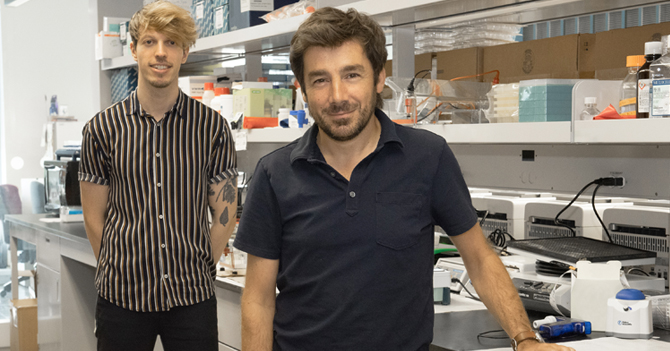 A team of CRCHUM researchers shows how T cells are indirectly involved in HIV persistence when fighting pathogens such as influenza viruses.

Antiretroviral therapy (ART) may well have revolutionized our ability to control HIV, but it’s not necessarily a panacea.

During the course of ART, HIV hides out silently in reservoirs located deep inside CD4+ T cells, white blood cells that are involved in activating the immune system to fight infection and pathogens.

The existence of these viral sanctuaries explains why antiretroviral treatment is not a cure and why it has to be a lifelong commitment to prevent the virus from “rebounding”.

Thanks to a new technique developed in their laboratory, researchers from the University of Montreal Hospital Research Centre (CRCHUM) show how these T cells expand in number when they encounter common pathogens, thus contributing to HIV reservoir persistence. Their results were published in Nature Communications.

We discussed these findings with Nicolas Chomont, researcher and professor in Université de Montréal’s Department of Microbiology, Infectiology and Immunology, and Pierre Gantner, a postdoctoral student in his laboratory and the study’s first author.

Q. Were you surprised by the results of your study?

A. We have known for some time now that the virus persists in CD4+ T cells. For the eight participants in our study, we show that, on average, 70% to 80% of the T cells, in which the virus hides were exposed to pathogens that commonly infect humans, such as influenza or cytomegalovirus. When they encounter these pathogens, the T cells expand in number. This immune response, a very normal infection-fighting process, indirectly triggers the proliferation of these HIV reservoir cells.

Q. The persistence of T cell HIV reservoirs is the main barrier to viral eradication. By limiting the proliferation of common pathogens in people receiving ART, could the number of T cells infected by the virus be indirectly reduced over time?

A. In theory, yes. We believe that preventing the proliferation of certain pathogens (viruses or bacteria) would keep the T cells that harbour the virus from proliferating as well. This means that it may be conceivable that certain drugs, designed to block pathogen proliferation, would reduce the HIV reservoirs. However, this still needs to be demonstrated.

Q. Does this mean that people treated very early after being infected should, in such cases, preventively combine ART with this type of drug to facilitate their eradication?

A. This could even be done in people who have been on ART for several years, because we believe that these pathogens are involved in maintaining these reservoirs over time.

For example, cytomegalovirus (CMV), carried by 70% of the human population, is regularly reactivated, but controlled by the immune system. Every time it is reactivated and an immune response develops in the body, it can increase the size of the HIV reservoir. Therefore, if we treat CMV infection to keep it from being reactivated, we might be able to restrict the expansion of these reservoirs.

Q. In your opinion, what unexplored therapeutic possibilities does your discovery open up?

A. Thanks to the technique developed in our laboratory with the help of Marion Pardons, Rémi Fromentin and Amélie Pagliuzza, we can map the specific receptors of pathogens found on HIV-infected T cells. This new experimental technique will allow for many other basic immunology applications.

In our case, it allows us to deduce which pathogens contribute to HIV reservoir persistence. However, the problem is that the virus may persist longer in T cells recognizing influenza in one person but not in another. Therefore, we would need individualized therapeutic strategies. This would be difficult to implement because we would first need to identify these immune cells and the pathogens that they recognize.

However, we believe that a “proof-of-concept”-type study with people harbouring HIV reservoirs in T cells able to recognize infections that we know how to treat (tuberculosis, for example) could demonstrate the usefulness of such an approach.

Q. Are you currently pursuing your research with a larger patient sample?

A. We are continuing our experiments at this time using samples from the U.S. Military HIV Research Program’s acute infection cohort RV254/SEARCH010, which began 10 years ago in collaboration with the Thai Red Cross AIDS Research Centre.

This is allowing us to explore the possibility that people living with HIV and treated very soon after being infected may harbour reservoirs in a small number of T cells recognizing a limited number of pathogens. If the reservoir exhibits less diversity, it should be easier to develop strategies to eliminate it.