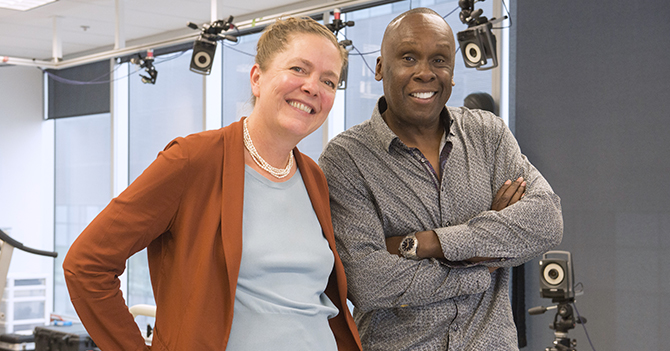 Are you familiar with the knee kinesiography test? Don’t waste time searching for the word in your dictionaries! Developed by researchers at the CHUM and École de technologie supérieure (ÉTS), it’s a bit like an electrocardiogram, but for the knee instead of the heart. This new diagnostic tool, created in Quebec, will help family doctors more easily detect abnormalities related to osteoarthritis and knee injuries and adjust treatment to each patient’s specific case.

Through a large study involving 450 patients and published in Postgraduate Medicine, the scientific team led by Nicola Hagemeister showed the usefulness of incorporating this new test into a GP’s medical practice to evaluate the biomechanical risk factors related to the progression of osteoarthritis.

This study divided the patients, who were seen at months 0 and 6, into three groups: the first group received traditional care from a GP; the second group was treated by a GP following a knee kinesiography test (treatment recommendations and exercises tailored to each patient); the third group also benefited from a one-hour training session on the causes of knee osteoarthritis and exercises to do, followed by two meetings with a therapist.

The patients of the two groups receiving the knee kinesiography test (groups 2 and 3) observed a significant reduction in their symptoms and pain, as well as an improvement in motricity when performing their daily activities. The fact of being informed (3rd group) further enhanced these good clinical outcomes.

The knee kinesiography test, or analysis of the knee in motion, is a real boon for family doctors. It helps diagnose the causes of the symptoms, allows the doctor to personalize treatment, reduces the need to resort to unnecessary exams such as MRIs, and optimizes patient care. In certain cases, surgery can be delayed, or even cancelled simply because patient-specific treatment is provided.

Osteoarthritis is the most common form of arthritis and affects one in six people in Canada. In the specific case of knee osteoarthritis, hundreds of thousands of Canadians could benefit from this new diagnostic tool, which would considerably improve their quality of life.

How does the knee kinesiography test work?

The "exoskeleton" attachment system for the knee, designed to eliminate skin and muscle motion artifacts, is placed on the patient’s lower leg.
Using an optical system, 3D knee kinematic data are captured while the patient walks on a treadmill at a comfortable pace, under dynamic, weight-bearing conditions. Data is captured in the three planes of movement.