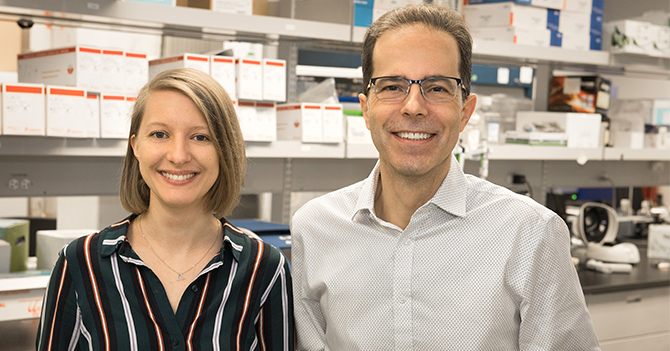 Most people living with HIV control the virus thanks to antiretroviral therapy (ART). Although this medication is highly effective, the presence of latent viral reservoirs in their bodies means they require lifelong therapy. Studies have demonstrated that immunotherapy combining two anti-HIV antibodies can also suppress HIV, similar to ART. Now an international team of researchers from the University of Montreal Hospital Research Centre (CRCHUM), the Rockefeller University (United States) and the University of Cologne (Germany) has shown that the use of these antibodies during ART interruption has an effect on the immune system of HIV-infected individuals.

In a study published in Nature Medicine, the researchers describe how injection of these potent anti-HIV antibodies, known as neutralizing antibodies, is associated with enhanced T cell responses that specifically recognize the virus. T cells are important white blood cells (lymphocytes) that help control chronic infections like HIV. This study shows an unsuspected interaction and a potential influence between the two arms of the human immune system: humoral immunity (antibodies) and cell-mediated immunity (T cells).

“It is really a proof of concept," said Dr. Daniel E. Kaufmann, a CRCHUM researcher and a professor at Université de Montréal. "Here, we analyzed blood samples from participants in a clinical trial conducted by our collaborators that used laboratory-produced monoclonal antibodies to block the virus. All participants maintained viral suppression for at least 15 weeks after the ART therapy was stopped.”

He added: “We observed what happened to other immune cells that target the virus. In this study, we documented the increase of the T cell immune response on nine HIV-infected study participants. But are these T cell responses more effective at controlling HIV than before this intervention? This remains to be demonstrated.”

A Phase 1b clinical trial

Two days before their ART therapy was stopped, nine individuals living with HIV and harbouring viruses sensitive to antibodies received a first injection of a cocktail of two antibodies. Recruited by the international research team, this cohort of individuals received new injections of antibodies after three and six weeks of follow-up. Blood tests were carried out every week to check if the virus returned.

Using sophisticated cell analysis techniques, Julia Niessl, the study's first author and a doctoral student in Kaufmann’s lab, observed that the activity level of CD4 and CD8 T cells responding specifically to HIV was augmented during the period of antibody therapy combined with ART interruption.

Antibodies work differently than drugs. They are not passive; in addition to blocking the virus, they “engage” the immune system and influence it.

“In the future," said Kaufmann, "this kind of antibody therapy will be studied in larger clinical trials for HIV prevention or treatment, as antibodies are very well tolerated by humans and can efficiently block the virus for many weeks."

According to the World Health Organization, approximately 37.9 million people were living with HIV at the end of 2018.

This research was supported by the U.S. National Institutes of Health; the Canadian Institutes of Health Research; the Einstein-Rockefeller-CUNY Center for AIDS Research; a BEAT-HIV Delaney grant; the Robertson Fund; grants from the Bill and Melinda Gates Foundation Collaboration for AIDS Vaccine Discovery; a Canada Foundation for Innovation Program Leader grant; and the AIDS and Infectious Diseases Network of the Fonds de Recherche du Québec-Santé.