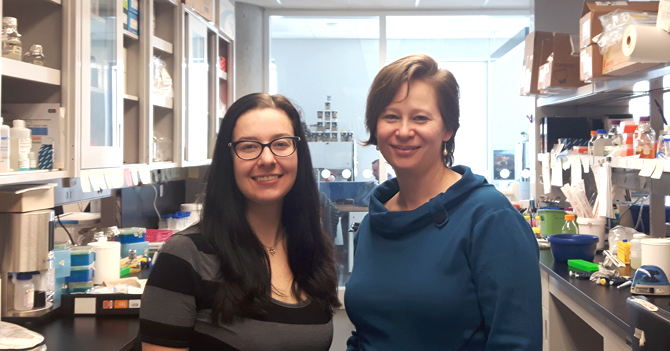 21 March 2018
A team of neuroscientists has made a discovery that points to the value of basic research for the long term and provides valuable avenues for future drug targeting. It would take eight long years of research for an international team headed by neuroscientists from the Université de Montréal to discover a physiological molecular mechanism that allows for a better understanding of the way amyotrophic lateral sclerosis (ALS), also called Lou Gehrig’s disease, works.

The discovery of this mechanism could one day lead to a new treatment for this degenerative disease that interferes with the brain’s ability to communicate with the muscles, which leads to paralysis and an untimely death for patients.

“This is a story of basic research into with what normally happens in the cells of the body and the changes that occur during ALS,” stated Jade-Emmanuelle Deshaies, an associate researcher in neuroscience at the University of Montreal Hospital Research Centre and principal author of the joint Canada-Israel study published recently online in the journal Brain.

“Even though such work doesn’t instantly lead to the development of new ALS treatments, they allow us to have a deeper understanding of the disease. Amyotrophic lateral sclerosis is a very complex disease that disrupts many cell functions. This type of research provides information for future drug targeting and for the development of biological markers whose goal is to detect the disease more quickly and track its progression.”

The study began eight years ago, when Deshaies and her supervisor, Professor Christine Christine Vande Velde of the Université de Montréal’s Department of Neuroscience, began to be interested in what happens to different molecules when TDP-43, a protein that binds cell “messengers”, collectively known as RNA, and that is a key feature of ALS, is removed from the cell.

“We were interested more specifically in other types of RNA-binding proteins that could play an important role in the way the disease worked,” recalled Deshaies. “One of them, hnRNP A1, caught our attention because a second type exists, but is rarely mentioned in the scientific literature.”

Scientific concepts behind this discovery

In molecular biology, genes code for RNA molecules, which are then translated into proteins, key components of the cell. There are different versions of RNA, each of which codes for many versions of a protein. TDP-43, for example, binds RNA and can change the way it is spliced, following the sequences ABCD or ABCEFG, for example. This is a process known as alternative splicing. The protein hnRNP A1, which also binds RNA, is spliced into two variants regulated by TDP-43.

But why are these concepts important in understanding ALS? Because TDP-43 is one of the main components of the non-living substances of the cell, called “cytoplasmic inclusions”, which are observed in 97% of the cases of the disease.

“The data that we have collected indicate that, when TDP-43 is either completely absent from the cell or absent from the nucleus of the cell, it is possible to change the way hnRNP A1 is spliced,” according to Vande Velde. “The key overall takeaway is that the metabolic deregulation of RNA is a lot more significant than we had previously thought. Thanks to this information, we have a better understanding of the components that are not working correctly and we can potentially design a new treatment that targets this mechanism.”

Research is simultaneously being conducted on another motor neuron disease, spinal muscular atrophy. Scientists are aware of the role of hnRNP A1 in the progression of the disease: it controls the splicing of an important gene called “SMN”, for survival motor neuron. Professor Vande Velde and her team don’t know yet whether the new splice variant that they discovered changes the levels or function of the SMN gene, but they point out that a new drug therapy for spinal muscular atrophy, which targets the splicing of the SMN gene by the hnRNP A1 protein, has existed for a year.

“The drug, called nusinersen, is marketed under the name Spinraza,” said the professor. “If it is administered to babies early enough, it can cure spinal muscular atrophy. Little children who couldn’t roll over or walk are now able to. Children who would normally have died at the age of two or three years are now moving through the motor development stages. This drug truly seems to be a cure for the most serious forms of the disease.”

Designed by researchers from the University of Massachusetts, the treatment interests Vande Velde because the work that led to its development was similar in approach to what her team is doing, i.e., “trying to understand how a gene is spliced”. It’s a therapeutic approach that results from the understanding of a molecular mechanism that involves alternative splicing.

“It took them many years to get there and, similarly, our work represents only the first step of the process,” she added. “We have to verify whether there really is an effect on the expression or splicing of the very important SMN gene or other genes that play a crucial role in the survival of the motor neurons.”

The work in her laboratory is also about perseverance. As Deshaies mentions, “in science, progress rarely occurs in a direct line. You often have to take a roundabout path to be able to explain and truly understand the phenomena you observe.”

“We are studying a mechanism that has never been studied before,” said Vande Velde. “Our preliminary results are contradictory and we need time to understand the role of TDP-43. The project is the result of a huge team effort. Team members from the Hebrew University of Jerusalem, the Université de Montréal and the Université de Sherbrooke, as well as Western University have all made major contributions.”

There are more studies on ALS in Quebec than anywhere else in the country and the work at the Université de Montréal has received financial support from Natural Sciences and Engineering Research Council grants and from the Amyotrophic Lateral Sclerosis Society of Canada, a non-profit organization. This is why it is important to inform the public of our discoveries, even if they don’t lead to new treatments immediately.

“I believe that it is important to tell patients and their families about the discoveries that have been made thanks to their donations, such as those made during the Ice Bucket Challenge,” said Vande Velde. “Many families want to learn more about the molecular aspect of the disease and how we are studying it and they understand that our work is a crucial step in the development of a treatment.”

The article “TDP-43 regulates the alternative splicing of hnRNP A1 to yield an aggregation-prone variant in amyotrophic lateral sclerosis”, written by Jade-Emmanuelle Deshaies and other collaborators, was published on March 19, 2018, in the journal Brain. DOI: 10.1093/brain/awy062.